After about two weeks of getting to know each other, I finally moved Sadie into the same cage with Domino. She is growing fast and her fur is getting softer. She’s trying to get the hang of the litter box, but she’s not all there yet. I’ve only been peed on once though! Sadie had special baby food (fancy pellets that she was used to eating from the farm she was born on), but I had to start giving it to Domino too, because she would hop in his cage and try to eat his food and he would hop in her cage and gobble her food up. It looks like the farm food is more tasty to both of them, so I’m going to try to just buy that for both of them. Anyone want 25 pounds of bunny pellet food?

Bunnies are really funny when they learn a new skill they seem to obsess over it. Domino recently discovered that he can jump up on the dining room chairs, then hop from chair to chair without touching the floor. The chairs are pushed in to the table, so he’s protected from above and from below. I have to watch it though, because the chairs are fake leather and is he scratches them up, he’s dead meat!

My dad built custom baby gates for me to block off the stairs so the bunnies can no run around the living room. They love it because there is a big sectional sofa to hide under and behind and the carpet is easier for them to run on without slipping and sliding. Sadie will let me pick her up, so I put her on the couch with me and force her into cuddling. Then Domino wants to see what is going on, so he jumps up in my lap too. Seems like his fear of being left out is helping him overcome his fear of possibly being picked up!

Here’s a short video I shot with my phone of Domino eating a cherry and washing his face.

Merry Christmas! Here are some pictures of my bunny Domino. He is about 4 months old now. My friend got him dried papaya treats, and he loves them so much that he freaks out when he hears the crinkle sound the bag makes. He will sit at my feet under the kitchen table (and sometimes nip them – ouch!). He loves to run around in carpeted rooms, but since he also loves to chew on electrical cords, he isn’t let out of the kitchen too much. He can now jump up on the couch. 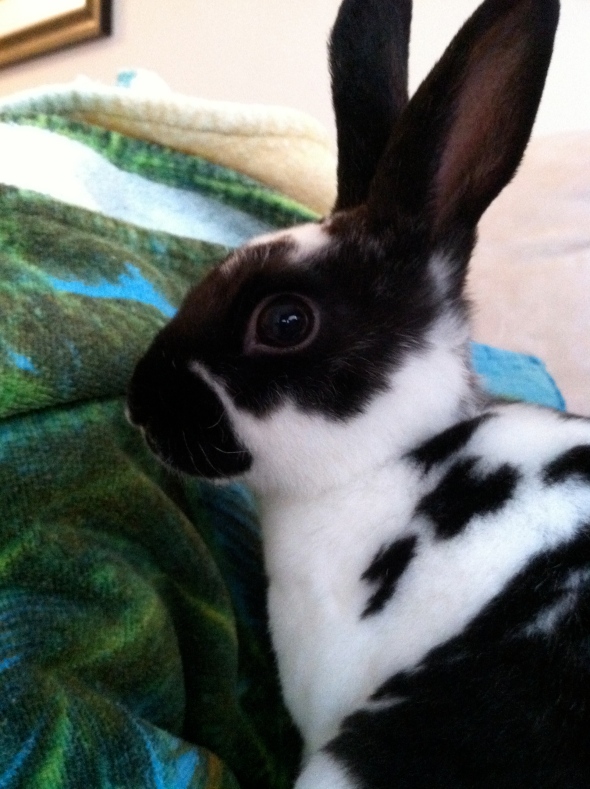 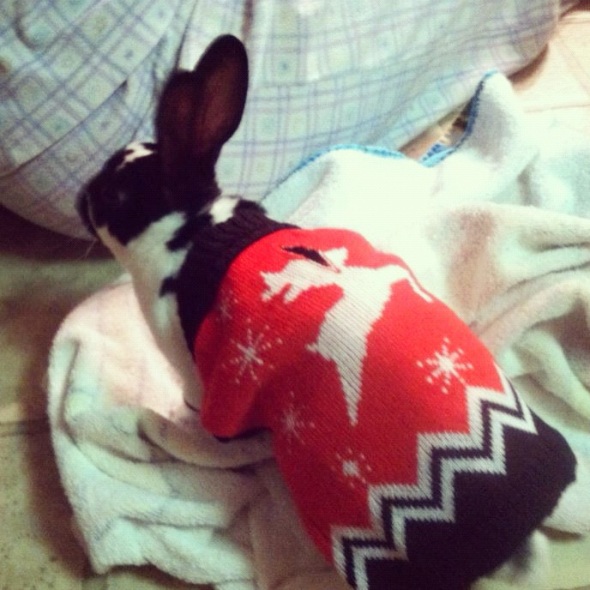 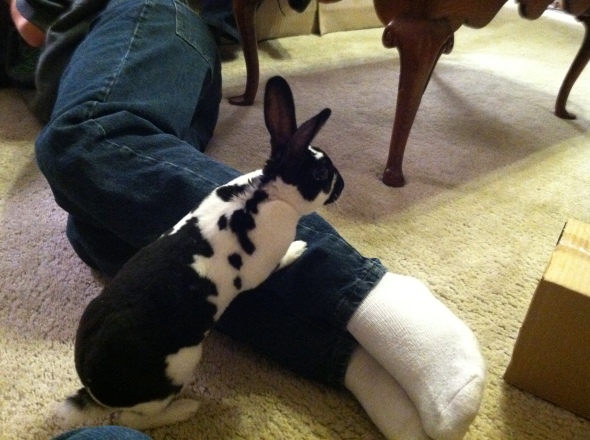 We cuddle every day

Chillin' outside his cage 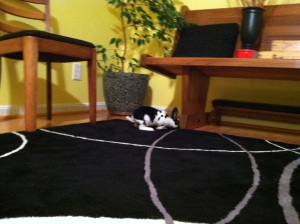 He even matches the decor!